BMW Teams Up with SOLARWATT GmbH for Solar Carport System

BMW has been working on various new technology products that can allow them to incorporate those technologies in their new vehicles. Now, BMW has claimed that they have teamed up with SOLARWATT GmbH that will allow them to create combine rooftop and carport photovoltaic solutions for future BMW vehicles. BMW said that they need to look out for futuristic technologies like solar energy that can be used to fuel the car energy in the future. The car maker said that with the new SOLARWATT carport system they will bring out their new BMW i3 and i8 in a new way. 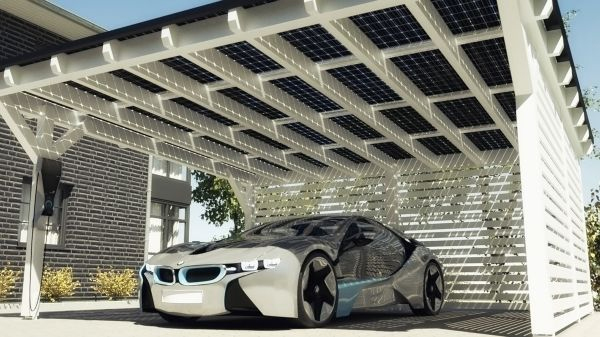 The company said that this new system will allow BMW i3 and i8 owners to use attractive solar based electric charging plus household microgeneration system. The company said that they will also include this carport system with the vehicles that they will sell but consumers can also buy this system separately or order it over the internet as per their convenience. The German car maker said that they have been taking steps to move forward in better electric car technologies and this carport system is one of its kind. The new system will offer customized solar solutions to all the electric BMW cars in the future.

The company also said that electric cars are getting popular and therefore they need to roll out better solar solutions that can allow customers to charge their cars naturally even while they are parked. The company said that these are practical and better solutions that will allow them to shape the future of energy supply.

We spend more time than ever before in ... END_OF_DOCUMENT_TOKEN_TO_BE_REPLACED

When it comes to speed, style and status, ... END_OF_DOCUMENT_TOKEN_TO_BE_REPLACED

The recent launch of BMW i8 has challenged ... END_OF_DOCUMENT_TOKEN_TO_BE_REPLACED

They may be parked in grounds of museums, ... END_OF_DOCUMENT_TOKEN_TO_BE_REPLACED