Some of the old school muscle car lovers would argue the battle between these two hood scoop types is incredibly easy to conclude. They would argue the raised scoop is a no brainer. On the flip side those who drive more modern vehicles like Porsche for instance; they would argue that the duct scoop is the better solution. 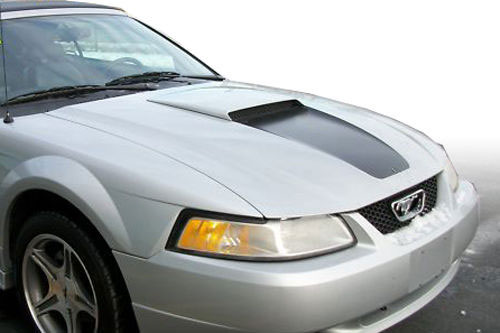 Now let’s breakdown this argument, as both hood scoops actually provide their own benefit:

Let us look at the duct scoop first off. As we mentioned this is a design we see quite often with Porsche vehicles, and the reason is because it is much sleeker and cleaner look. The duct scoop unlike the raised actually goes down into the hood gradually, and promotes airflow with its slope design. Now it may not conduct as much as air flow as the raised, but what it does is actually cuts down on considerable drag the raised might cause.

So now with that said we take a look at the raised scoop, and as we mentioned the raised promotes better airflow to the engine, which produces better power output. But the flipside of that coin is that the raised hood scoop now creates more drag on the vehicle, in some cases slowing the vehicle down, and reducing overall performance.

Final debate really isn’t whether which one produces better overall power and performance output. The real argument isn’t necessarily an argument, more a matter of preference. Do you like the look of a raised hood scoop, or do you like the of a duct scoop.

We spend more time than ever before in ... END_OF_DOCUMENT_TOKEN_TO_BE_REPLACED

When it comes to speed, style and status, ... END_OF_DOCUMENT_TOKEN_TO_BE_REPLACED

The recent launch of BMW i8 has challenged ... END_OF_DOCUMENT_TOKEN_TO_BE_REPLACED

They may be parked in grounds of museums, ... END_OF_DOCUMENT_TOKEN_TO_BE_REPLACED