Ford GT40 Roadster would be the Most Precious Ford Ever

Do you want to be the one to own world’s most expensive Ford? Well, you have the chance now as RM Auctions, an auction company, has announced the sale of Ford GT40 roadster at Monterey on Saturday, August 16. The sale price has not yet been disclosed but speculations are that it would be more or less $5 million.

Employed as a factory demonstrator by Ford and Shelby American, Ford GT Prototype No. GT/108 was the first out of 4 manufactured mainly for racing in exhibition classes. The exciting part is, this is the only of those four vehicles to stay in an immaculate condition. 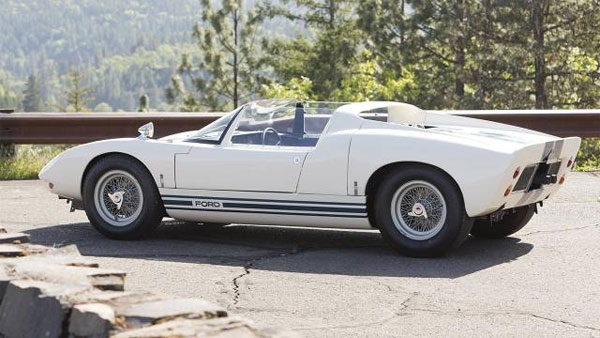 This GT40 from 1960’s is priceless, as it has a long acclaimed history. It was tested by none other than the British race drivers Dickie Attwood and John Whitmore. The prototype was then shipped to Shelby American, where it was used for exhibition purpose by Shelby USRRC team. The most dedicatory moment in this car’s history arrived when the legendary Ken Miles drove it to give a ride to the executives, who participated in board of directors meeting. Most interestingly, it was driven by Carroll Shelby himself with Henry Ford accompanying him.

The car carried the original engine which was there at the time it was sold to the private hands by Ford Factory. After that, the car was seen at a very few occasions like GT40’s 25th anniversary reunion in 1989 at Watkins Glen. Other notable motorsport gatherings that witnessed the car include Amelia Island Concours, The Quail and Pebble Beach.

As it is quite obvious that this would be an expensive ride to own, it would still be at par for its fabled antiquity. The RM’s flagship monetary sale has now returned to California and will be held on August 15 – 16 this year.

We spend more time than ever before in ... END_OF_DOCUMENT_TOKEN_TO_BE_REPLACED

When it comes to speed, style and status, ... END_OF_DOCUMENT_TOKEN_TO_BE_REPLACED

The recent launch of BMW i8 has challenged ... END_OF_DOCUMENT_TOKEN_TO_BE_REPLACED

They may be parked in grounds of museums, ... END_OF_DOCUMENT_TOKEN_TO_BE_REPLACED