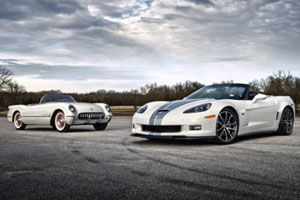 General Motors have always provided the best to the consumers and Corvettes are really popular in the US since 1953 when they were first launched in the market. The company said that Corvettes have always impress consumers with the kind of signature looks that they have and the car designers have always come up with interesting shapes that not only improves the aerodynamic ability of the car but also makes it look sleek and aggressive on the road. The company said that they have been making Corvettes for more than 60 years but the only similarities in these cars is the kind of signature look each one has.

The company said that there is a huge technological advancement between each of the Corvettes and all six generations of Corvette have something unique in it but they all share distinctive appearances which makes them the same family. Tom Peters, GM Performance Vehicle Design Director said that every generation of Corvette has its own signature look although they are miles apart in terms of technological advancements. He said that every Corvette design is truly American and focuses on art and passion that Americans have towards their cars.

He revealed that the most common features of Corvette is waterfall effect in the exteriors. He said that those who are using Corvettes will understand that waterfall effect is something similar that they find in every Corvette apart from dual cockpit architecture which focuses on cockpit designed for jet fighters and Americans love that kind of architecture for sure.

We spend more time than ever before in ... END_OF_DOCUMENT_TOKEN_TO_BE_REPLACED

When it comes to speed, style and status, ... END_OF_DOCUMENT_TOKEN_TO_BE_REPLACED

The recent launch of BMW i8 has challenged ... END_OF_DOCUMENT_TOKEN_TO_BE_REPLACED

They may be parked in grounds of museums, ... END_OF_DOCUMENT_TOKEN_TO_BE_REPLACED