Honda has decided to introduce their new Multi Purpose Vehicle at the 21st Indonesia International Motor Show where they will release the first official sketch of the brand new Honda MPV that has already created lot of buzz in the market. Honda said that this will be the right event for them to introduce the first official sketch of the vehicle. Honda Prospect Motor announced that they are glad to release the global premiere of their brand new car at the event that is scheduled from 19 September to 29 September 2013 in Jakarta, Indonesia. 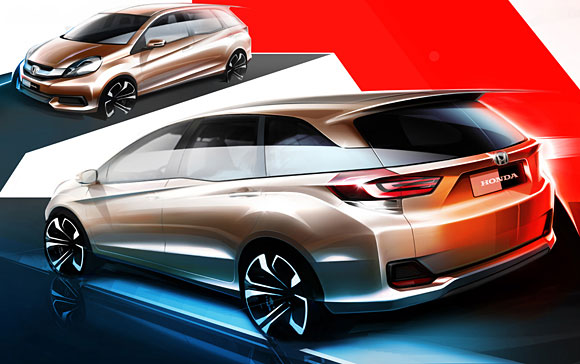 Honda said that they are launching the first sketch in Indonesia because the new Honda MPV is developed for the Asian market by Honda R&D Asia Pacific Company in Thailand and P.T. Honda R&D Indonesia. This will be the first ever Honda MPV that will be for the entry level market and also the biggest category in the Indonesia market. During the announcement, Honda said that Indonesia is one of the best markets for Multi Purpose Vehicles. The new MPV will offer seven seat configuration with three rows and will have spacious cabin which is a must if Honda wants to make this MPV successful in the Indonesian market.

The new MPV will be powered by 1.5 liter gasoline engine that will offer sporty performance and better fuel economy which is something that most Indonesian car buyers look out for. It will also have innovative design that looks aggressive and contemporary. Honda has also incorporated many safety features in the vehicle to offer better protection and overall crash safety to the occupants. The automaker also said that the car will be produced locally in Indonesia in the second plant that they have in Karawang and the operations will begin in early 2014 while the car is scheduled to be in the market by the end of the second quarter of 2014.

We spend more time than ever before in ... END_OF_DOCUMENT_TOKEN_TO_BE_REPLACED

When it comes to speed, style and status, ... END_OF_DOCUMENT_TOKEN_TO_BE_REPLACED

The recent launch of BMW i8 has challenged ... END_OF_DOCUMENT_TOKEN_TO_BE_REPLACED

They may be parked in grounds of museums, ... END_OF_DOCUMENT_TOKEN_TO_BE_REPLACED