How safe is your Subaru?

Subaru looks out for your safety with the new EyeSight. The EyeSight is Two cameras mounted by the rearview mirror to react to conditions even before you do and monitor traffic. It sees the problems and takes action to help avoid the trouble. Eyesight will also flash a visual warning and sound an alert if there is danger of a collision and will apply the brakes automatically if you do not. It can also optimize cruise control and warn drivers when they are straying outside of their lane.

The Insurance Institute for High Safety has recognized Subaru as the only manufacturer with a top safety pick winner for all models. Subaru is bringing its EyeSight camera-based driver-assist technology to the U.S. in the Legacy sedan and Outback wagon. The EyeSight was also the best performer, with the Liberty and Outback the only models tested to come to a complete stop without hitting the dummy vehicle in front. It scans horizontally with a forward range of about 260 ft as well as laterally every 0.1 s. From the vehicle’s centerline, the black and white cameras have a 25-degree angle of view and a 13-degree upward viewing angle. The system needs a 20 mph speed differential, essentially 2.5 s to recognize an object.

Unlike radar-based systems employed by the likes of Audi and Mercedes-Benz, Subaru’s EyeSight technology uses a pair of wide-angle cameras mounted on the upper, inside edge of the windshield. Typically, such components have been placed in the grille or bumper, which Subaru suggests makes them much more susceptible to damage. 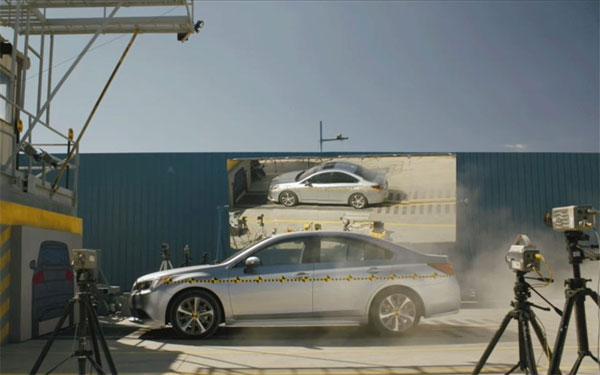 Adaptive cruise control isn’t new to the auto industry but like all the features, it doesn’t use sonar to determine distance–it uses the stereo cameras that act like human eyes. It uses the cameras for all four elements with the main advantage that it can tell the difference between steam rising from a manhole cover and an actual man. Sonar has a hard time telling the difference sometimes. While some drivers might prefer to switch the accident detection system off if they enjoy aggressively approaching slow moving traffic, our 2013 Subaru Outback tester proved the system’s effectiveness when it came to a screeching halt just short of a car mockup.

The lane departure systems helps alert the driver if the vehicle drifts out of your lane without the turn signal on. This is very useful in case the driver becomes distracted. The system will also detect if the vehicle sways in the lane, a sign that the driver may be drowsy. Another useful feature is throttle control, if the vehicle accelerates towards an obstacle the throttle is reduced and the brakes may be applied.

Safety comes first, and nobody holds this statement to be more true than the car manufacturers. Each year, new models feature new safety systems that help keep drivers and passengers safe. When leaving a parking spot, the system can deactivate the throttle if there is an object in the way. Subaru says this feature is useful if a driver accidentally puts the car into Drive instead of Reverse. Other car manufacturers that used sonar and radar based safety systems usually placed these devices on the front bumper, where they were always in danger of damage in case of an accident. Placing EyeSight’s cameras inside the car protected them from such threats.

Whether your eyes are on the road or not, Eyesight is another way of Subaru looking out for you.

Read PreviousFiat 500e – Fuel Efficient and Fun to Drive
Read Next$1.25M Euro-Spec Ferrari F40 LM Converted for the Legal Streets of the US

We spend more time than ever before in ... END_OF_DOCUMENT_TOKEN_TO_BE_REPLACED

When it comes to speed, style and status, ... END_OF_DOCUMENT_TOKEN_TO_BE_REPLACED

The recent launch of BMW i8 has challenged ... END_OF_DOCUMENT_TOKEN_TO_BE_REPLACED

They may be parked in grounds of museums, ... END_OF_DOCUMENT_TOKEN_TO_BE_REPLACED