Mazda Ready to roll Out 2013 Axela in Japan 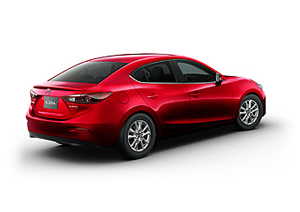 Mazda has been introducing some of the best performance cars in the year 2013 and now Mazda Motor Corporation has announced that they are ready to take pre-orders for the new Mazda Axela also known as Mazda3 overseas. The Japanese car maker said that they are happy with the kind of response that they have received for this sports compact car and starting October 10 buyers can place their orders at Mazda, Mazda Anfini and Mazda Autozam dealers available throughout Japan. The automaker said that the price for the new 2013 Mazda Axela will be from 1,711,500 Yen to 2,982,000 Yen that includes all taxes. The car will officially go on sale from November 21 that will have gasoline and hybrid models.

While making the announcement, Mazda revealed that this will be the third car that will incorporate Mazda’s next-generation SkyActiv Technology and the new KODU –Soul of Motion design concept. The first generation Axela was launched almost a decade ago and it managed to impress buyers then with the new sporty features that were included. Axela is known for offering responsive handling and better drive performance and therefore Axela gets the new SkyActiv Technology. Mazda said that according to their records they have so far sold 3.7 million Axela units which comprise around 30% of their sales volume.

The all new 2013 Mazda Axela will also have two new colors; Titanium Flash Mica and Deep Blue Crystal Mica apart from the eight body colors that are already available. The interior of the car is spacious and sporty and gets the Heads Up Cockpit concept that makes the interior very driver centric. The car will be available in 1.5 liter and 2.0 liter gasoline engine and 2.2 liter diesel engine and hybrid car will have 2.0 liter gasoline engine combined with an electric motor for better fuel economy and performance. All the cars will also have MazdaConnect for better connectivity options.

We spend more time than ever before in ... END_OF_DOCUMENT_TOKEN_TO_BE_REPLACED

When it comes to speed, style and status, ... END_OF_DOCUMENT_TOKEN_TO_BE_REPLACED

The recent launch of BMW i8 has challenged ... END_OF_DOCUMENT_TOKEN_TO_BE_REPLACED

They may be parked in grounds of museums, ... END_OF_DOCUMENT_TOKEN_TO_BE_REPLACED