History of the State Pension

The state pension has a long history stretching back over 100 years. During this time, both the pension itself and its surrounding legislation has transformed from the simple payment first received in 1909. 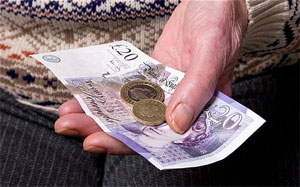 Following the passing of the Old Age Pensions Act in 1908, half a million elderly people found themselves suddenly eligible for a maximum of 5 shillings a week (£19.30 today). This benefit was means-tested and applicable for males, above the age of 70 with a yearly income of less than £21 per year. There were, however, a number of criteria that could lead to an individual being excluded. Drunkenness, idleness, a prison sentence within the last ten years, and bad character could all be seen in a negative light.

In an age where only one in four people reached pensionable age with a life expectancy of just nine years following this, the Old Age Pensions Act was introduced by a liberal government. This was to form part of wider social reforms implemented by then Prime Minister David Lloyd-George as a method of ensuring those whose life expectancy now far exceeded their working years were not forced to live in unfavourable conditions. The age required to qualify for this new pension was 70.

However, it was during the first half of the 1990s that saw the framework we still use today being introduced to the pension system. This was done alongside the Social Security Contributions and Benefits Act of 1992 as well as the Superannuation and other Funds (Validation) act.

This continued to shift and reform, especially after the release of the Goode Report, which then made way for the Pension Schemes Act of 1993, as well as the 1995 Pensions Act.

Yet this wasn’t the last thing that was heard in terms of the reform to the pension system. 2002 saw a review of the system by the Pension Commission, which saw the birth of the Pension Regulator in 2004.

The Pensions Act of 2007 also altered the state of pensions by upping the pension age, and also aligned them too.

Finally, the Pensions Act of 2008 introduced the idea of Auto Enrolment for occupational pensions, and 2011 followed closely with retirement ages rising once more, and also covered a range of other changes that reformed the pension to make it look more like the way it does today.

This pension is available for those who reach state pensionable age before the 6th of April 2016.

The maximum amount you can receive per week with the Old State Pension is £115.95 each week.

If the growth in wages and prices is below 2.5%, then the pension will automatically increase 2.5%. However, if the average in wages or prices is more, then pension seekers can expect to see the higher value of the two honored in their payments.

You might also have to pay tax on this payment depending on your situation.

This pension promises not to fall below the mark of £151.25 per week and there are plans for this figure to be set into stone during autumn this year.

This pension is calculated by making full use of your National Insurance information and you need to have at least 10 years of national insurance payments to get access to the New State Pension.

It’s also worth noting that your pension payment will be affected by how much National Insurance you have paid over the years, which could affect a lot of people.

What perhaps needs to be mentioned is the fact that the pension may be taxed, so make sure you take a look here to learn more about this.

If you continue to work after you start receiving your pension, you won’t have to pay National Insurance any longer. This can be an attractive prospect to those who are continuing to work after they hit retirement age – as many still choose to do.

What does the future of the state pension look like?

Inflation occurs year upon year, and because of this, the state pension must shift and change to adapt to this.

One such way the government are encouraging more pensions savings is by introducing Auto Enrolment.

This will see everyone who is eligible across the UK receive access to a workplace pension scheme. The business, the employee and the government will all pay into this scheme which has been designed to provide people with more funding at retirement age.

People can opt out of Auto Enrolment – but considering the life expectancy in this country is increasing, the extra money you generate for your fund with Auto Enrolment could be vital to your future.

The state pension will also likely have to rise to keep up to date with the current market place, but when it comes to watch the future holds – only time will tell.

Read PreviousAutomatic Gates – Which Gate System is best for my business?
Read Next5 Business Finance Ideas for Startups