The wine festival in Beirut has again brought Lebanon into focus, this time for a positive reason. The country has beat Portugal to achieve a new record.

The Guinness Book of World Records adjudicator Liz Smith officially confirmed this as she posed before the glass with its engineers. The largest wine glass in the world now belongs to Lebanon.

The giant wine glass was unveiled with much fanfare at the Hippodrome in Beirut during a wine festival. Scores of people marveled at the plexiglass vessel that has become a pride of Lebanon.

Organizers of the festival poured around 100 bottles of red, white and rose-colored wine into the vessel. Onlookers were seen to be smiling at the cocktail, though no one seemed to be in the mood to taste it. The size of the glass ensured that not even a quarter of it was filled.

Organizers rejoiced the fact that winemakers across Lebanon had contributed a part of their produce for the festival. The wine festival is a part of Lebanon’s attempts to promote its wine. About fifty percent of Lebanese wine is exported to other countries. 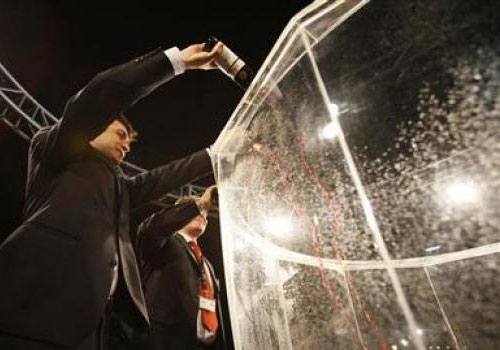 In recent years, Lebanon has won other laurels like serving the biggest preparation of kibbeh (fried filled wheat dumplings), tabbouleh (salad dish) and hummus (chickpea cuisine). The giant glass is being seen as another of Lebanon’s attempts to break its negative image as a politically disturbed nation and promote its taste for good living.

Read PreviousThe Beauty Of Vacationing in Your Home Town!
Read NextAnorexia Nervosa and Unplanned Pregnancy May Go Together