It’s been 23 years in the making.  Late last year, Toyota began selling its hydrogen-powered Toyota Mirais cars in California — marking the first time that hydrogen-powered vehicles were sold in the United States.  As of January 2016 Toyota had sold 64 of the Mirai but demand is increasing fast.  After decades of talk, the hydrogen car is finally here. 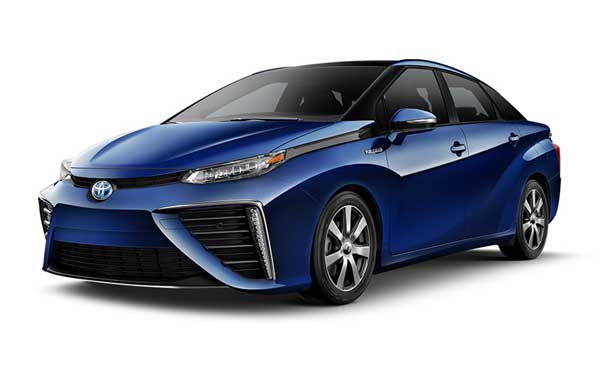 Most people think that hydrogen cars burn hydrogen as a fuel.  That is incorrect.  Westbury Toyota serving Long Island NY explained to us that the best way to think of hydrogen-powered vehicle is as an EV (Electric Vehicle) that is capable of making its own electricity.  Like an EV, the propulsion is provided by an electric motor, however, the difference lies in how the motor is powered. A battery powers the engine in traditional EVs, whereas a device called a “fuel cell” generates the electricity to power the motor in hydrogen cars.

The way fuel cells work is by fusing pressurized hydrogen stored in on-board tanks with oxygen from the outside air. During this process, electricity is created that is released to power the motor. Water vapor is also created and is released as a waste product.

Hydrogen powered cars do have battery packs, like hybrids and Electric Vehicles do, but the batteries are much smaller because they are only used when the car has higher performance demands, like when it is accelerating. The primary way the battery pack is refueled is by regenerative braking, which means the battery is charged by the electricity produced when the brakes are applied.

Where you can get them filled

Toyota’s success with the Mirai will be based a lot on the availability of hydrogen filling stations.  California was the first state to openly embrace the possibility of hydrogen-powered transportation and started building infrastructure (filling stations) several years ago. So far, there are 51 hydrogen stations throughout California that are either already open or are slated to open soon. Other states that are building refueling stations, in addition, are New York, New Jersey, Connecticut, Rhode Island, and Vermont.

Just for reference, there are 12,131 electric EV charging stations in the United States today so the hydrogen community has a little catching up to do in terms of infrastructure.

The sales of hydrogen-powered cars like the Mirais are a classic “chicken or egg” paradigm.  People will be unlikely to buy the cars if hydrogen filling stations aren’t nearby.  So the push for filling infrastructure is a key factor in adoption. That being said, the Toyota is estimating 3,000 Mirais on the road in the US by the end of 2017 and 30,000 by 2020.

At the present time, the Toyota Mirais retails for $57,500 and each one comes with 3 years of complementary fuel. Potential buyers should look into rebates that currently come with the purchase of the Mirais.  At the time of this writing, the State of California is offering a $5000 rebate incentive on all hydrogen fuel cell vehicles and there is an $8000 federal tax credit for qualified buyers, in addition.

We spend more time than ever before in ... END_OF_DOCUMENT_TOKEN_TO_BE_REPLACED

When it comes to speed, style and status, ... END_OF_DOCUMENT_TOKEN_TO_BE_REPLACED

The recent launch of BMW i8 has challenged ... END_OF_DOCUMENT_TOKEN_TO_BE_REPLACED

They may be parked in grounds of museums, ... END_OF_DOCUMENT_TOKEN_TO_BE_REPLACED