Most people know that automobiles come with two basic transmission types. First there are manual transmissions  which require that drivers change gears by depressing a clutch pedal and using a stick shift and  second there are automatics which do all of the shifting work using a torque convertor and complex sets of planetary gears. But there’s another type of transmission  that that offers the best of both worlds — the dual-clutch transmission (DCT). This article will explore how a dual-clutch transmission works and why some predict that it is the transmission of the future.

A dual-clutch transmission is basically  two manual gearboxes in one. To understand what this means, it’s helpful to look at how manual gearboxes work. When a driver wants to change from one gear to another, he first presses down the clutch pedal. This operates a single clutch, which disconnects the engine from the gearbox and interrupts power flow to the transmission. Then the driver uses the stick shift to select a new gear. Once the new gear is engaged, the driver releases the clutch pedal, which re-connects the engine to the gearbox and transmits power to the wheels. 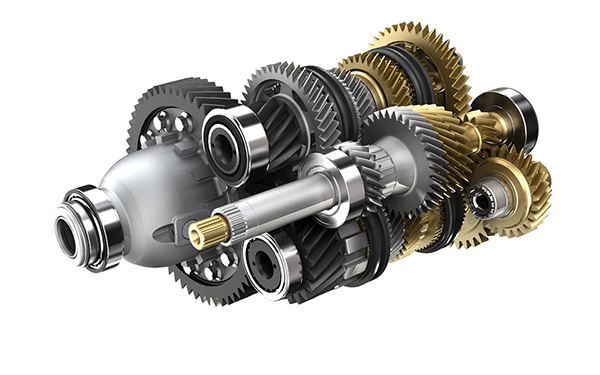 A dual-clutch gearbox, by contrast, uses two clutches, but has no clutch pedal. Sophisticated electronics and hydraulics control the clutches, just as they do in standard automatic transmissions. In a DCT, however, the clutches operate one at a time. One clutch controls the odd gears (first, third, fifth and reverse), while the other controls the even gears (second, fourth and sixth). Using this arrangement, gears can be changed almost instantly without interrupting the power flow from the engine to the transmission. This is one of the reasons that dual-clutch transmissions are so popular in race cars today.

Some explain that a DCT is an “automated manual transmission.” In principle, the DCT behaves just like a standard manual transmission: It’s got input and auxiliary shafts to house gears, synchronizers and a clutch. What it doesn’t have is a clutch pedal but even without a clutch pedal, the driver can still “tell” the computer controlling the transmission when to take action through paddles, buttons or a gearshift. Perhaps the most compelling advantage of a DCT is improved fuel economy, though. Because power flow from the engine to the transmission is not interrupted, fuel efficiency increases dramatically. Some experts say that a six-speed DCT can deliver up to a 10 percent increase in relative fuel efficiency when compared to a conventional five-speed automatic.

We spend more time than ever before in ... END_OF_DOCUMENT_TOKEN_TO_BE_REPLACED

When it comes to speed, style and status, ... END_OF_DOCUMENT_TOKEN_TO_BE_REPLACED

The recent launch of BMW i8 has challenged ... END_OF_DOCUMENT_TOKEN_TO_BE_REPLACED

They may be parked in grounds of museums, ... END_OF_DOCUMENT_TOKEN_TO_BE_REPLACED